The store will not work correctly in the case when cookies are disabled.
Free STANDARD SHIPPING on Orders over $75
Details 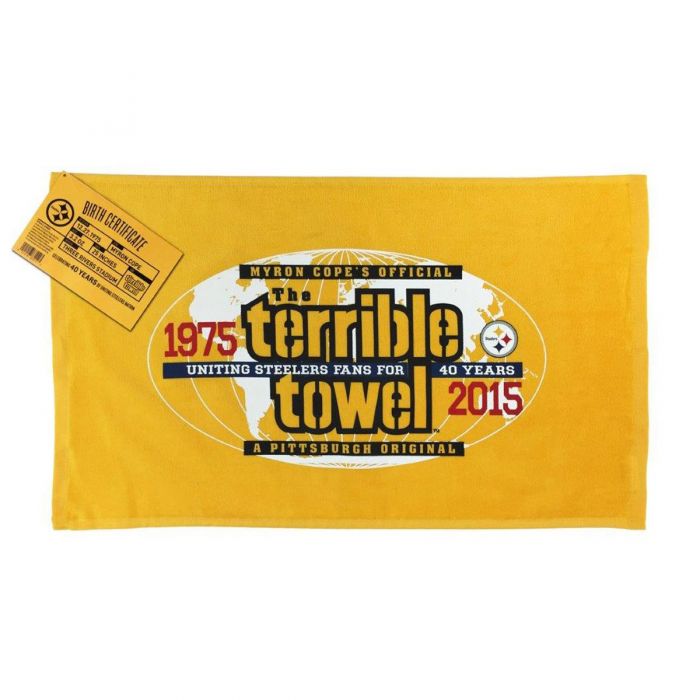 The Iconic Terrible Towel, the cloth that is imitated but never duplicated, turns 40 this year.

The Terrible Towel made its debut on December 27, 1975, in an AFC Divisional playoff game against the Baltimore Colts . The Steelers won that game 28-10 on their way to their second Super Bowl victory in as many years. Here is how Myron Cope, the Towels inventor described his creation :

"The Terrible Towel is not an instrument of witchcraft…it is not a hex upon the enemy. THE TOWEL is a positive force that lifts the Steelers to magnificent heights---and poses mysterious difficulties for the Steelers’ opponents only if need be. Many have told me that THE TERRIBLE TOWEL brought them good fortune, but I can’t guarantee that sort of thing because the Steelers, after all, are THE TOWEL’S primary concern. Still, at the least, the symbol of THE TERRIBLE TOWEL will serve as a memento of your having been part of the Steelers Dynasty of the 1970’s. And if it causes good things to happen to you, so much the better"

Happy Bithday, Towel, you're not just getting older, with the backing of Steelers Nation, you're getting more powerful each season.